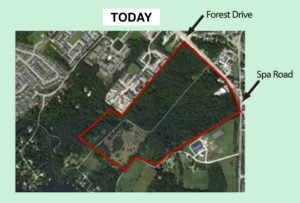 Since the inception of plans for the development of Crystal Spring, the destruction of 30-40 acres of mature, protected forest has been a pivotal issue of concern to residents of the area. National Lutheran Communities and Services (NLCS) filed plans with the City of Annapolis on January 22, 2019 to build 303 senior homes and apartments and 48 assisted living units on the Crystal Spring property. The project would have a 35-acre footprint and would destroy 30 acres of priority forest that is supposed to be protected.

We believe this can and should be reduced further. Our position is unflagging that forest loss must be reduced and 100% of forest cleared must be replanted on site. This is consistent with the law now that the City Council has passed the No Net Loss of Forest ordinance. This law requires developers to minimize forest clearing and replace trees cleared on an acre-for-acre basis. We worked closely with the Mayor and Council to ensure this legislation was enacted and that the new law would apply to the Crystal Spring development. It was a huge win as developers and their attorneys vigorously opposed the law, including NLCS who had been refusing to keep their promise to reforest 100% of forest cleared.

After months of negotiations with the developers over our four major concerns, we were astonished when the January plans proposed clearing 30 acres and replanting exactly ZERO. On August 6, NLCS CEO Larry Bradshaw wrote in the Capital, “Our January development application was based on a now-outdated forest conservation worksheet that was in use by the City of Annapolis at the time of our submission.” This is completely disingenuous as they were well aware that the No Net Loss ordinance passed months before these plans were filed. His engineers simply tried to use a loophole to avoid keeping their pledge to replant.

For almost 10 years, we and city planners have prodded the developers to meet or exceed all state and local environmental laws, yet their new plans failed to meet even the minimum requirements of the city and state Forest Conservation Acts and Stormwater Laws. The January filings were so far off from meeting current basic environmental laws and requirements, it took Planning and Zoning (P&Z) until June 12 to complete just one aspect of its legally mandated review. That review was confined exclusively to the environmental problems with the plans and resulted in five pages of single-spaced comments requiring major changes to the development proposal. Many of these changes will result in significant increases in the cost of the project while potentially eliminating some of the units for sale. The changes will also likely save close to 10 acres of forest.

After reducing forest clearing to about 20 acres in accordance with the June 12 directives from P&Z, the developers must keep their pledge to replant 100% of cleared forest acre-for-acre on site. This reforestation can be achieved on the 13.3-acre open meadow in the south of the property and on other available conservation land on the 179-acre property. Since the developers and owners of the entire 179-acre tract have agreed to permanently protect all land outside the 35-acre NLCS footprint with a conservation easement, finding the land to replant on site should not be a problem.

Note: This is the second post in a series focusing on where we stand on our four major issues of concern with the Providence Point development plan at Crystal Spring. Click here to read our first post on traffic.