Gerald Winegrad, our leader in our successful efforts (so far) to protect the forests, fields, and wetlands at Crystal Spring and save us from the traffic nightmare, will be performing at 49 West on Wednesday, June 27, from 7 – 9 p.m. in a show he researched and put together–“SEARCHING FOR THE SOUL OF ANNAPOLIS.” 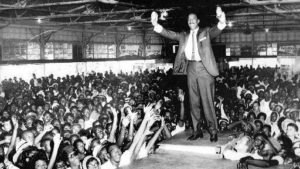 Gerald met with Mayor Buckley to educate him on Crystal Spring during the campaign last year, along with his good friend and fellow music buff, Brian Cahalan, co-owner of 49 West. They were rather intrigued about the old Annapolis music scene and Gerald’s my early involvement with soul music and the singers. Finally, at the urging of Brian, he agreed to develop a multimedia presentation on growing up in Annapolis in the 1940s-1960s. “SEARCHING FOR THE SOUL OF ANNAPOLIS” is the product of much research and work.

The show will feature a PowerPoint with music of legendary soul performers and great old photos of the Annapolis soul music scene–Carr’s Beach, Hoppy Adams, The Van Dykes, and many others.

Admission is free, but donations will be welcome to the Crystal Spring Legal Defense Fund. We hope you will plan to attend and will spread the word.

**Also, please check out the feature on the event in the Capital’s Entertainment section:

Annapolitan Gerald Winegrad, 73, grew up in Annapolis during the 1940s through the ‘60s. He was a member of the House of Delegates from 1978 to 1983, and the Senate from 1983 to 1994. Over the years, he rose to the rank of Commander in the U.S. Naval Reserves, and is an environmental activist. And, through it all, he’s been a musician, too.

As a young man, Winegrad became very involved in the soul music scene. In that segregated era, he was drawn to the spectacular concerts staged at Carr’s Beach, one of the rare places African-Americans could enjoy a day at the beach in this region.

Wednesday evening from 7 to 9 p.m., Winegrad is hosting a multi-media presentation, “Searching for the SOUL of Annapolis,” at 49 West Coffeehouse, 49 West St., Annapolis.

The presentation, Winegrad said, is the product of much research and gathering of old photos of the City scenes from that era and those of Carr’s Beach – and created after much cajoling from Brian Cahalan, owner of 49 West..

The show will consist of Winegrad doing a PowerPoint with great old photos of the Annapolis soul music scene, including some of Carr’s Beach, famed Radio Station WANN DJ Hoppy Adams, and the great performers Winegrad knew, met, saw live in concert, or listened to during the period of his youth growing up in Annapolis starting in 1946.

He said Hoppy Adams took him under his wing and arranged for Winegrad, then a teenager, and his friends to meet James Brown between the performer’s Bandstand-on-the-Beach Shows at Carr’s Beach.

As Winegrad discusses the various soul greats who performed at Carr’s Beach, their music will be playing. He will also present “an awesome live performance by James Brown, the King of Soul, in 1964, perhaps the best ever captured on video.”

He will also discuss race relations, segregation, and overt discrimination occurring back then, including to the performers, and how soul music helped soothe the wounded soul of Annapolis and break down racial barriers.