On May 26, thousands of motorists were affected when once again Forest Drive came to a complete standstill after an accident. While the traffic on Forest Drive was bad enough, the accident caused a ripple effect leading to significant delays throughout the entire Annapolis area. As we’ve seen so many times before, the Annapolis Police Department (APD) did not have the manpower available to direct traffic, even posting on their Facebook page that there were “only a handful of officers working” and therefore it would be several hours before the road could be reopened. 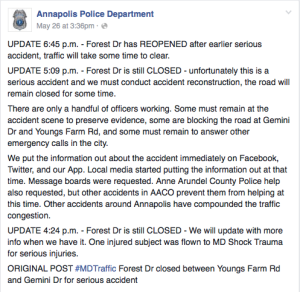 We want to be clear that this post is not an attack on the APD. We are thankful for the service that our police officers provide. However, the fact that there were only a “handful” of officers on duty in the middle of one of the most crowded weeks of the year in Annapolis, Commissioning Week, is extremely disconcerting and needs to be addressed by the City.

The problems we saw with this accident are just the most recent symptom of a larger problem within the City of Annapolis. It starts with the fact that the City has not prioritized ensuring our public facilities and infrastructure are able to handle the increased growth that comes with the City’s approval of new developments. This includes our schools, roads, police force, fire department, and other emergency personnel that are already struggling to keep up. The City continues to approve projects, such as Parkside Preserve next to Quiet Waters Park and Rocky Gorge, while another dozen projects are working their way through City approvals, including Crystal Spring.

This issue is compounded by recent reports in the Capital and elsewhere that the City may have illegally approved new developments without following the Adequate Public Facilities law that ensures we have enough police officers to accommodate new population growth. The law provides a benchmark to make sure the City’s public resources, such as police, fire, and EMS can keep up with growth. The fact that we do not have enough police officers on duty to adequately manage a traffic accident scene and redirect traffic is completely unacceptable. But to continue to approve new developments that cause further overcrowding of this corridor without ensuring adequate public resources are available is disgraceful.

Additionally, as the City Attorney has recently found, the terms of several major annexations, including Crystal Spring, have been violated. Several properties annexed into the City for development have failed to connect to City water and sewer services as outlined in their individual agreements, costing City property owners hundreds of thousands of dollars in increased costs for fire insurance.

Once again, it seems the City’s first priority lies with appeasing developers, rather than the safety and security of Annapolis residents. They’ve continued to approve new development despite warnings that Forest Drive is nearing or already exceeding capacity and in need of major improvements to support new growth. They’ve continued to look the other way and approve more developments that add children to our already overcrowded schools. Now we see they’ve ignored the need for additional police officers to ensure public safety remains a priority with new growth.