ANNAPOLIS, Md. (April 11, 2016) – Today, the leadership and supporters of Stop Crystal Spring presented over 2,200 petition signatures from residents who oppose the massive development planned for the congested area of Forest Drive and Spa Road. The organization hosted a rally outside City Hall attended by more than 150 residents of the City of Annapolis and surrounding areas. Following the rally, the petitions were presented to Mayor Michael Pantelides and the City Aldermen during the Council meeting. More than 60 percent of the signatures were from city residents. 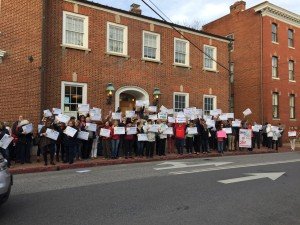 The petition drive, launched on February 19, is urging Mayor Pantelides to honor his campaign pledge to stop the development because of its detrimental impacts on traffic, the environment, and school overcrowding. In a little under two months, 1,346 city residents and 856 county residents signed.

“For years, local opposition to this development has been written off by the developers and the City as anti-growth sentiments from county residents,” said Gerald Winegrad, former State Senator and coordinator for Stop Crystal Spring. “Today, we have shown that the opposition to this development is much deeper and broader and includes a huge number of City residents–we are a diverse group of residents from the city and county who oppose this project for many different reasons. Most importantly, we have shown we will stand together and take action to stand up for our way of life and the Annapolis we all love.”

Today’s announcement is part of a growing campaign by local residents of the city and surrounding areas. Earlier this year, Stop Crystal Spring launched a new communications effort aimed at recruiting local residents and giving them an outlet to express their opposition to local officials. A new website, www.stopcrystalspring.org, launched on January 19, provides information and updates on the development and also gives residents an opportunity to easily contact local officials. Since the launch, over 6,000 people have visited the website. Over 100 residents have submitted unique letters to the Mayor and City Council. Stop Crystal Spring also launched a new Facebook page, which has collected over 1,800 followers. 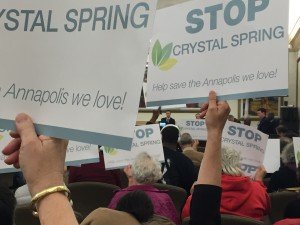 This evening’s rally and presentation before the City Council featured several speakers who were all city residents, including Reverend William Hathaway, Pastor of First Presbyterian Church in Annapolis; Amy Clements, President of the Spa Creek Conservancy; Jim Urban, who is an urban planner and served for ten years on the City Planning Commission; Roxana Rodiguez, owner of the Caliente Grill on Bay Ridge Road; and Catherine Stavely, Annapolis Elder Care Attorney. Hunt Meadow resident, Charlie Dammeyer, told his personal story of growing up in Annapolis, enjoying the forests and the Bay, and wanting his young children to know that same experience. Statements were also presented to the Mayor and City Council on behalf of Mark Mineo, a developer and International Realty Specialist at the U.S. State Department, and long-time educator Agnes Abernathy.